Say What You Mean

In the last 10 days or so I've had 3 different people hit me up with "action statements." What's that you ask? Well, that's when someone makes a statement, but it isn't just any statement, oh no. It has far more meaning than a mere statement. They expect you to follow it up with some action even though that's not what they said.

Example One: "Judy, I'm going to be in your neighborhood this weekend." See, it's a statement. My answer of, "Oh" was completely appropriate, but not really. I'm sure the person telling it to me meant for me to say... well, something. "Great! Let's do lunch!" or "Cool! Let's see a movie!" or even "Don't go down Main Street it's full of construction." I didn't though. I didn't have the desire to pursue it more. I had no idea if "I'm in your neighborhood" meant let's meet up for an activity or let's spend the day together and I didn't feel like playing 20 questions to figure it all out. 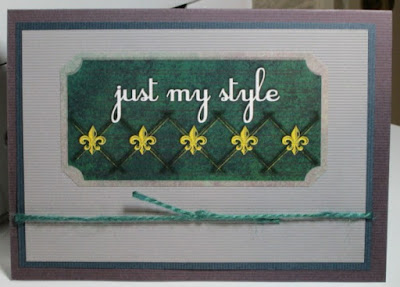 Example Two: "I have a big box of cardstock in my trunk." That's another statement. That one was a bit more puzzling so my reply of, "Why?" was spot on. The answer was that it was from a lady who was going into a home and couldn't take it all with her. My answer was then, "Oh." I'm sure I was supposed to offer to buy it from her, or take it, or offer some suggestion. Except for putting it in a recycle bin versus a trash can I don't have a suggestion, especially if that suggestion requires some sort of action or responsibility on my part. I'm full up on those this month.

Example Three: "I have January 2 off!" That's a fine declarative statement and I answered it with, "Me too!" Much like the first person I'm sure there were implications and hints that we should do something together. I was very reluctant to bite into that one mostly because that person is always very late if she shows at all. I didn't want to be beholden to someone else's time on my very last vacation day. 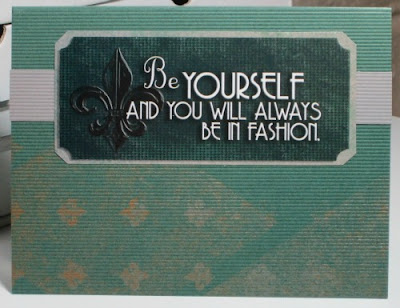 Interestingly, all three of these action statements ended there. The person who started it didn't pick up the conversation again to say what they were truly after. The way I look at it, that's on them. And since they are all women they are all probably pissed off at me now. I mentioned this to my male friend, and he said he was no fool. He knew to say exactly what you mean when talking to women. Then he invited me to lunch next week with an action statement for him, "I'll call you on Monday so we can decide when and where."  That's my kind of friend!

The Fine Print: Random kit cards that I made quite awhile ago and just now got around to sharing.You can't rush these things.

Posted by Princess Judy Palmer at 4:00 AM

Haha. I think my trouble is that I do tend to just say what I mean and then people read in between the lines when there is nothing in there!

I like the cards! I love the green color, I should use that more for not Christmas cards.

I know just what you mean and good for you for not taking the bait offered.

Got me laughing here PJ! 'Hey, I'm about to parachute onto your roof'!! At which point I hope you would say - 'Good, clean out the gutters on your way down and then clear off please'. Great card BTW!

heh heh, you always have a knack for making me smile, chuckle, or grin from ear to ear. That does not require any further action either in case you were wondering. Good for you not biting on those loaded statements - they always somehow cost more than just a simple response once you reply to them :) These cards are great and say just what's meant to be said - in crystal clear language! LOve them both!

haha those statments are so funny!

your cards are so pretty!
lots of
hugs, Ŧĭƙĭ
≽ܫ≼

Ah - those leading statements that you don't really answer - if you do you are bound to be committed to something you don't want to do/be involved in :-) Well side stepped Princess J.
Love those two cards - they are very much 'you'.
Blessings
Maxine

Super cards Judy, a lovely font on the second one.
You do make me laugh with your little stories!
Pauline
x

Obviously none of those women were close friends, so guess no harm done. There are some advantages to being isolated like I am now--none of that to deal with--haha! Pretty cards!