There I was moving random things around on my craft desk today when I ran across a triple flip card base that I die cut several months ago and then rejected for being too white. Since the card base was totally usable I left it on my desk and moved it from one pile to another. I'd uncover it from time to time but it never inspired me. 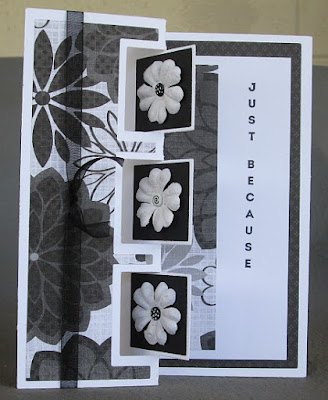 Until today! When I found it today I immediately felt that it needed to be made into a black and white card. For a little while there I toyed with the idea of making the flowers hot pink for a pop of color, but my desire to have it be just black and white persevered. 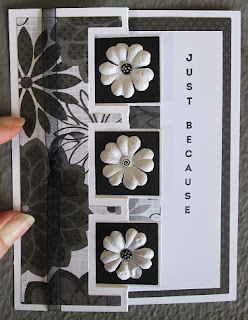 After dinner I sat down at my computer and started visiting some blogs and ran into one black and white card after another. I thought it interesting that we all got called by the same muse. Only, it turns out that everyone else' muse was the latest Double D challenge. I was adamant that I wasn't influenced by it until I decided to join it and went over it. Yeah, I remember glancing at those cards before and I'm sure my subconscious latched onto Kathy's card. So thanks, everyone for helping me finally use this card base that has been languishing for so long! 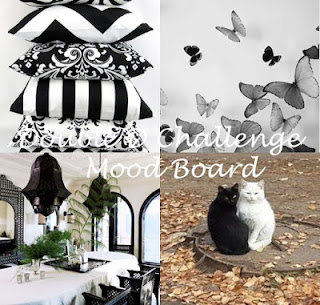 The Fine Print: Card base and layering die by Sizzix, designer paper by DCWV, greeting by Stampin' Up, paper flowers by Prima, black and white brads from my stash.
Posted by Princess Judy Palmer at 5:33 PM

Email ThisBlogThis!Share to TwitterShare to FacebookShare to Pinterest
Labels: All Purpose, Flip Flop

Beautiful triple flip card, Judy! Glad you finished and joined us at the Double D Challenge Blog's, "Black and White" Challenge. Thanks for playing along!

I'm with Vicki ... so glad you FINALLY brought this triple flip card to life and it's beautiful! Thanks so much for joining in the fun at our Double D ‘BLACK & WHITE’ challenge! We hope you’ll come back often.

Way to go PJ. This is a totally awesome monochrome card. Love it just as it is, but the hot pink flowers would also have been a good alternative.

what a classy looking card..like the flip front.
xx Karen

This is a real stunner in classic and elegant black and white! I love the flipped flower panels and how this card folds! So glad you finally brought it out from your stash and finished it! Gorgeous!

PERFECT! yep the pop of color would have detracted from it. it's gorgeous.

Wow--what a great card, Judy! I love pink, but think you made the right decision sticking with the black & white!

I love your triple flip black and white card. Putting things to one side often works. Great inspiration on this one. It works perfectly. Barbxx

A fabulous card Judy, a super black and white design - I always struggle with different card bases, you did a great job with this one.
Pauline
x

Fabulous flip card and so perfect for our challenge! Thank you for joining the fun at Double D!
Diane DD DT