Did you know that today is not Monday? Nor is it the 24th. I thought it was both Monday and the 24th but it turns out it is neither. Then I go and look at the last entry I posted and I didn't know what day it was then either. 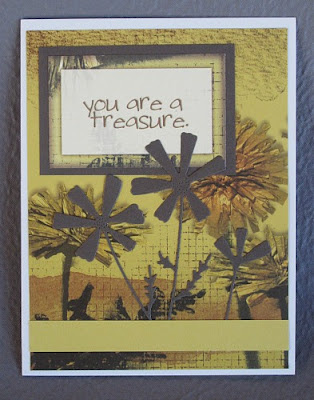 It can only be one thing: Early Onset Senility. It was bound to happen sooner or later. *sigh*

The Fine Print: It is also still January, which I knew because that thing just will. not. end. Card and pars by Club Scrap except the dies which are Memory Box, which cracks me up since mine is obviously broken.
Posted by Princess Judy Palmer at 2:08 PM

Sometimes it makes perfect sense to let go of the calendar and forget about time completely! Zone out now and then - it's good for the soul! This card is a real treasure too with the dies and stamps and great sentiment!

This is very nice!

You are too funny! The MB die cuts are the perfect addition to your lovely card!

Lovely card Princess J, and just to get you up to speed, it's late Thursday the 26th here. hope that is not too confusing.
Blessings
Maxine

A lovely card Judy and the black die cuts looks perfect. I often Don,t know what the day is and never know the date! Barbxx