Using my Scraps on Rudolph Day

Yesterday was the 25th which means that it is Rudolph Day time from now to the end of the month. I thought I would kill two birds with one stone (so violent!) and make a Christmas card using scraps so I could also play along with the Use Your Stuff Challenge. 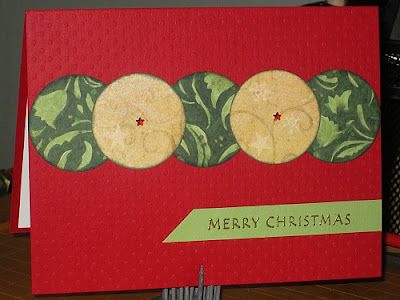 I wanted to try out this rather simplistic card design I saw recently when pursuing the web. It really spoke to me even though CAS isn't usually my thing. This is my version of it. I really like how it came out and I have visions of similar cards I can make--and not all Christmas. It really is a great way to use us your scraps even though with this small amount of them on your card you'll need to make to a thousand more to use up your scraps (or is that just me?).

The Fine Print: Dotted card background by Bazzill, designer paper by K&Co., circle punch by Marvy, and greeting and star shaped bling by A Muse Artstamps. True confession time--those aren't my scraps, well I guess they are now since they were in a stash of Christmas designer paper that my friend gave me, but I didn't create them.
Posted by Princess Judy Palmer at 9:25 AM

Happy Rudolph Day to you.

great layout. you did well with this, my friend.

A super card Judy, a brilliant way to use up your scraps.
Pauline
x

Great colours and a lovely mix of scraps, make a super card.

I LOVE this clever design, CAS, yet so colorful - It's easy mailing, would be easy to mass replicate, and it's just quite unique! I think you've picked a perfect look for Rudy Day, and Snippets too. Did you jump over to the Snippets Playground? If not, I think this one deserves to enter. Like you observed, this design layout would work for many occasions, & colors. Also liked the way you've angled the sentiment too. TFS & Hugs

Lovely card. Such a simple design, but so effective. Looks really classy.

I like this simple design and the way you used your snippets! I recently spent a few hours punching square snippets for quilt cards, so it must be snippets week for crafters!

Love it Princess J - great sketch and a great take on it. Love that they weren't officially your scraps - well you didn't make them, but you did own them, so we can let you off.
Blessings
Maxine

I love this CAS card design and your colours are stunning too. Thank you for joining the fun at the Rudolph Day challenge.
Kath x
RD DT

Very nice contemporary way to use your scraps for Rudolph day!

This is the perfect way to use your scraps! Great card. Thanks for playing along at USE YOUR STUFF - Gail

Perfect use of your scraps! Lovely creation! Thanks so much for joining in the fun at the USE YOUR STUFF Challenge Blog! We hope to see you again next week!

What a LOVELY CAS card! Great use of your scraps :)

Thank you for joining us at Use Your Stuff! Hope to see you again next time

Very cool design and great scrapping... a thousand cards should keep you going for a while!
Alison x

Whether you created them or not, great use of scraps! Love this design!

Lovely way to use up scraps, even if they're not yours! Funny enuf I've used circles on a card .....might have to wait till next Rudolph day to see it......xxx

Yep--at least a thousand--haha! However, it is a really neat design & so versatile--love this, Judy!