An Apple a Day

One for the Snippet Playground!


Once upon a time, in a galaxy not so far away I was sitting around eating an apple and cheese at my desk for my early morning snack (I guess the rest of you folks call that 'breakfast') when my coworker stopped by to say hi.

She then proceeded to tell me about an article she read in the paper that said that the apples you buy in the grocery store are already many months old by they time they get there. That's because of the whole global market thing and they travel in from all over. I nodded along and continued to eat my apple.

She made a face at me and shuddered.

"I can't believe you are going to keep eating that apple after what I just told you about it."

I shrugged. Many months old apples are the only apples I've ever known. A fresh apple off a tree? I only had that as a kid and yes, those wee green apples were damn good but I know those days are long gone. Besides that apple was good. 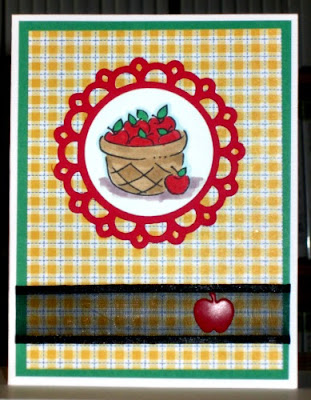 The Fine Print: These apples were picked just last night but that apple brad is several years old, as is that ribbon and probably that designer paper. Here's me using up stash!  Apple stamp by DeNami Designs and apple brad by Recollections.
Posted by Princess Judy Palmer at 11:48 AM

I don't think I could cope with an apple and cheese for breakfast. Anyhow your apple card looks great Judy and I love the little apple brad. Barb.xx

If I quit eating everything I've heard something negative about there would be no food left to eat. I'm with you -- fresh apples probably better, but we don't seem to have that option.

Your apples look very fresh and delicious, PJ! Love that little brad! Have a great weekend!

Looks good enough to eat! Love the little basket too. A great card Judy.
I hear you on the apple - I mean, if you want it, eat it. We'd probably be shocked to really know about some of the things we eat - but if it's good, I say go for it!
Lynn

an ancient apple and some cheese is probably one of the best breakfasts one could eat! Cheese, does your friend know how long it takes to make cheese? And I wonder if she likes blue cheese and/or knows what the blue color comes from? LOL Great card with that fun apple brad and I like the checkered papers too!

Apple and cheese - a match made in heaven and a great breakfast too! So long as the apple is crisp who cares about the age.

Super card PJ - and lots of sbippets used as well.

And it's great to see you in the Snippets Playground!

Hi PJ . . . your apple card is great. Well done for using up some more of your stash.

I completely concur with Sandy's comments!

I suppose she's right, but then what did SHE eat? I'm really curious, because if she knew what our food goes through to get to us, she prolly doesn't each much! I, for two, have my head firmly planted in the sand about such things, although I do admit to being a purist when it comes to my chokkies (that's a lie!) and my wodka (that's not a lie!). I'm glad to hear your apple was GOOD, because so is your card, PJ!! And kudos and coconuts to you for using your vo stuff!! Enjoy your day; I hope it stays sunny! Hugs, Darnell

Darling image--not one I remember--& that brad is the perfect embellishment! I love your just picked apples!

Plus if you've already eaten half the apple, is the other half really going to hurt you?!

Cute gingham look to this card - think we should all put on our gingham dresses and go out to the orchard and pick us some fresh apples. How'd she like them apples?
Alison x

Apples were designed for storage, it's why they're wrapped so well in their skins! Most autumn fruit and veg get stored for the winter months, nothing new happening there, and cheese sounds like the perfect companion! Fabbie happy apple card, and such a cute brad. Orange Pippins! Hugs xx

An apple a day keeps the Doctor away! That's what my Mum used to tell me.
Great design PJ..I would have never had guessed that your lone apple was old lol.
Chrissyxx