So back in the days when I was still driving my truck.... before some kid in his daddy's Beemer crossed over the center lane and murdered my baby, which I then replaced with the top of the line all the bells and whistles and ridiculous features car that was was then brutally murdered by a red light runner when it was but a baby so I replaced that with a year old not quite top of the line car without some bells and some whistles and no ridiculous features that got into a fender bender thing when it was just a toddler....yeah, before all that... so anyway I was driving my truck along and a firetruck, you know those huge red things with all the ladders and buff men in big coats hanging off of it, came zooming up the street behind me with all of its bells and whistles and flashing lights and screaming sirens on, so I pulled over.

Right? I pulled over just like you are taught to do when an emergency vehicle with its lights and sirens on shares a road with you, except for the road had had a curb so I pulled over as far as I could. Anyhow Bibsy in the car behind me either didn't get the memo or was too busy texting, painting her nails and waxing her bikini line and almost plowed into me. She was so affronted by my actions that she laid on her horn and whipped the wheel of car to zig zag around me.

Only she pulled into the lane the firetruck was in causing him to veer around her and he laid on his horn.....

as only a firetruck can.


And she slammed her car hard over into the curb at the side of the road.  It was a thing of beauty.  Her waxed bikini line? Not so much. 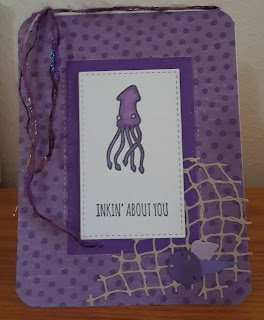 The Fine Print: That's all really. Just wanted to let you know that I was thinking about y'all. Stamps by Amuse. Yeah, I'm still alive. So what?!

Email ThisBlogThis!Share to TwitterShare to FacebookShare to Pinterest
Labels: A Muse, Seaside

Oh what a traumatic life you and your trucks live, Princess Judy!! Those events must have given your heart a real work-out!!
Sorry to hear of all that, and great to see you back blogging with this fabulous card. Love the colour scheme and that 'net' on the corner is a wonderful accent
Blessings
Maxine

So glad to hear you're still alive, PJ! Good to see you share a fun card! Love the octopus and the fish net he got tangled in!

Love the story of your adventures, but your luck seems to be on the unlucky side of the road with your vehicles! So glad you were not injured but I'm sure you had the beejeebees scared outta you!! It's SO GOOD to see you posting a card again and know you still craft now and then! Love the mesh on this purple fun card, and stay safe now, ya hear?

well, that's quite a story. good to see ya again.

this is funny story.
card is so nice!
happy to see you here in blogland
hugs

OH MY!!! People on the roads are NUTS!!!! Your story made me cringe and giggle at the same time. Your card is so fun with the netting in the lower corner!

Your purple squid is awesome. Gosh, glad your angels are working well. Take care. I am overimpressed by your ability to write down the sound of a firetruck horn. Hugz