Something makes a noise in my boss' office from time to time.  I can't call it a rattle or a creak.  It definitely isn't a moan or a sigh.  What is sounds like, and probably is, is the sound of the metal struts around his floor-to-ceiling windows expanding or contacting as the temperature changes.  It is sort of a pop clunk sound. Often we get the added bonus of his faux wood built-ins settling right afterward.  Whatever it is it is enough to make it sound like someone is in there when no one is.

That sound likes to mess with people.  How it goes down is someone will come to my desk and ask if my boss is in.  Right after I say, "No" the noise will happen and the person at my desk gives me this look that says, "Nice try, I can hear him in there." 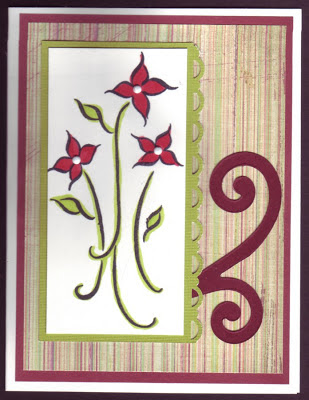 I've tried to explain that it is just a noise but no one believes me so now I just shrug and nod my head in his office's direction.  The person will give me that knowing smile and walk into his office.  They always stop short and say, "but there is no one in there!"  To which I reply, "That's what I said."

Sometimes I make a joke about the ghost of troubled students. However, maybe I should watch what I say because the other day the usual scenario went down:

"Is your boss in?"
"No."
Clunk. Pop. Seeettttle.
The you've-been-busted look.
Smile, nod.
"There's no one in there!"
"Just the ghost.  He's hardcore."
The person gave me a very spooked look and hightailed it right out of here.

Oops.  I guess I'll be on the lookout for the powers that be sending by a priest and some smudge pots or perhaps a telepath and some incense, or maybe even a whole ghost hunting crew, budget permitting.

The Fine Print:  I'm kind of bummed that our office isn't really haunted, but my previous office was in a haunted building and that was kind of fun, except a few times when people got spooked.  I hope I didn't share this card before.  I thought I copied a bunch of new cards onto my jump drive but apparently I copied them into the ether cuz they ain't on there.  Stamp by DeNami, border punch SU (I think) and swirl by Quick Kutz.
Posted by Princess Judy Palmer at 11:05 AM 2 comments:

We are halfway through the latest A Muse Studio Challenge.  This time it is all about Thank You cards.  There is always plenty of need for thank you cards, but this time of the year especially what with moms, dads, grads, babies, weddings, birthdays and vacations (because of course you send a thank you card to the pet sitter!). 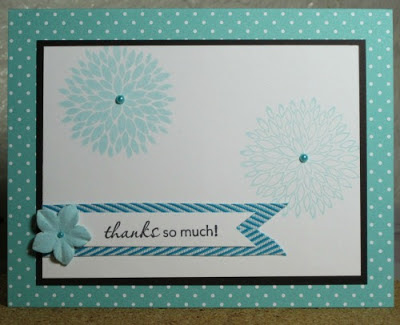 While the challenge is called the A Muse Studio Challenge it does not require that you use A Muse Studio stamps, so why don't you make a thank you card and join our challenge today!  There is a mystery prize to be had for one lucky participant.

I did use A Muse Studio products on my card.  That chevron ribbon is so popular right now that many other companies are now offering it as well.  I think it is fun but I find it hazardous on my eyes, so while I did use some of it I also covered a lot of it up.

I made this card this weekend. 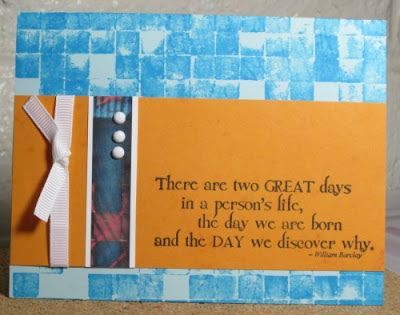 I also took many naps, ate too much food, and read my book.  That may sound rather lazy but really I'm suffering from Post Traumatic Stress Syndrome now that my economics class is over.  It may take a solid week of naps to recover from it.  I'm sure my boss will agree with me.

You know that annoying kid?  The one who picks a fight with others and then promptly turns around and tattles, "Mooom! Johnny's picking on me!" 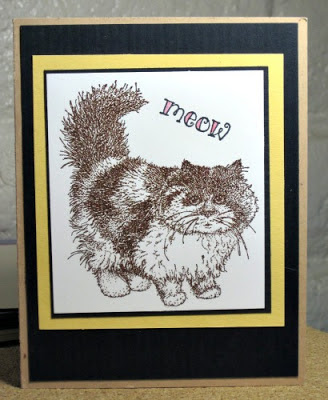 Yeah, that's my cat, Charles.  He picks play fights with the other cats and once they engage he gives a meow for help.  It is the high pitched distinctive, "Hey, help me!" cry that cats give.  I'm onto him now though.  One of these days I might even tell him, "If you don't stop crying, I'll give you something to cry about!"

The Fine Print: Cat by Mostly Animals, greeting by TAC I think, cardstock from stash.  I already tell my cats, "Don't make me set down my beer" so I'm well on the way to parenthood.  And btw, I unloaded the card into yesterday's post that I forgot.  Forgot as in just plain left out.
Posted by Princess Judy Palmer at 12:13 PM 3 comments: 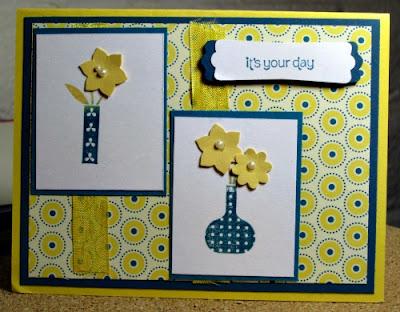 Oh.  And I want pineapple upside down cake.  Stat!

The Fine Print: I have to rely on the apartment managers for the toilet fix.  They seem to be busy with repaving the entire parking lot or something.  They hired someone to do it so it isn't like they are the ones out there spreading tar, surely they have time to fix a lousy toilet.  Don't call me 'Shirley.'  Card stuff by Stampin' Up I reckon.  It is a bday card from a friend-EM.
Posted by Princess Judy Palmer at 4:56 PM 3 comments: 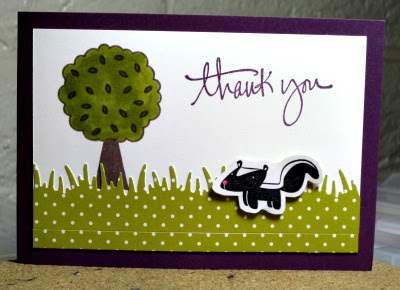 And that is pretty much what I did for this card.  I felt like getting back in touch with A Muse's roots and went for some of their old style stamps and came up with this card.  I still haven't gotten over the fact that wasabi is the only green available in a pattern.  I lament the loss of grass because that was grass I wasn't allergic to!

Feel free to whip up a thank you card and join in our challenge at the A Muse Studio Challenge Blog.  There are fabulous cash and prizes to be had (minus the cash).  You don't have to use A Muse stuff to join but you get extra brownie points if you do.

And stay tuned.... in two weeks it will be my turn to host the challenge!

The Fine Print: Notecard-sized card this time. Stamps used-Friends Fur-Ever and Hand Scripted. Cardstock used-blackberry, sugar and wasabi petite polka dot. Inks used-blackberry and Memento black. Other products used-Copic markers and Martha Stewart's grass punch.  Shhh... pretend I used the A Muse Studio grass die. I would have if only I knew where it was.  And that is the problem with those slim lightweight dies; if they go missing they could be tucked away anywhere!
Posted by Princess Judy Palmer at 8:45 AM 3 comments: 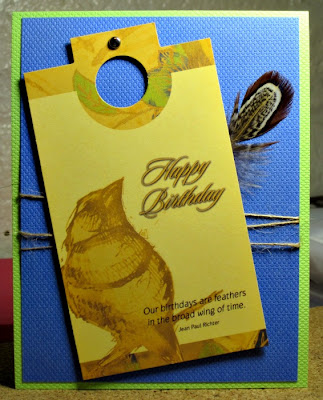 Sometimes when I am driving around the great city of Tucson, I see someone that immediately makes me play the game 'Dude or Chick?'  That game involves you trying to guess if the person you see before you is a dude or a chick.  Usually when I see someone that I am unsure of their gender they are pudgy fat, with fleshy thighs, large buttocks, hips, stomach roll, breasts, and a couple of chins that may or may not be hiding an adam's apple.

However the other day I got to play Dude or Chick right outside my office door.  Unlike previous times this person was physically fit, slender with some muscles.  The chest was ambiguous. It could have been small pert breasts or it could have been nicely developed pectoral muscles.  The shaved arms and legs weren't a clue because I know some athletes shave for a better rubdown after a workout.  The person was looking down at their laptop so I had no facial clues.  I found excuses to wander in and out of my office multiple times but never did decide dude or chick.

The whole reason I thought of this story is my favorite dude or chick person is back!  I've passed this person on the way to work for years (except winters apparently) and the jury is still out.  Whatever gender he or she may be I suspect he is down on his luck as I see him walking from the park with a harvesting of aluminum cans in the same clothes day after day.  I applaud his consistency. Or her consistency.  I surely do not know.

The Fine Print: I hope y'all weren't offended by this post.  My intention isn't to make fun of people or gender bash people. I find it interesting that sometimes societal and body clues leave you guessing.  I wonder what it is like to live a life where service people don't know to call you "ma'am" or "sir."  Card stuff by Club Scrap again, except the twine by May Arts and the feather by nature and sold to me in a craft store.
Posted by Princess Judy Palmer at 10:19 AM 3 comments: