Whatever Floats Your Boat

I'm sure you've heard that expression, "Whatever floats your boat" before.  Now stop and think about it for a moment.  Just what the heck does that mean? 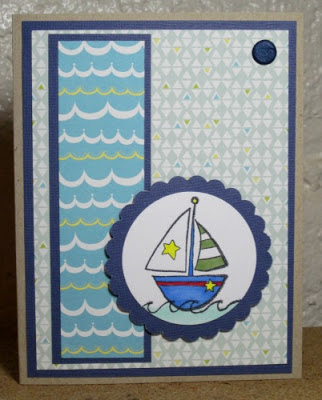 I don't know about you, but I don't have a boat but if I did I'd float it in water because floating it down rivers of Mt. Dew just sounds sticky and using rivers of blood sounds macabre.  What do other people, honest to god boat owners, use to float their boats?  Water, that's what.

So from henceforth whenever someone says, "Whatever floats your boat" to you assume they just yelled "WATER!" at your face and respond appropriately.

The Fine Print: And that is my prescription for good, clean living and the best social interaction money can buy, which of course since this was free advice isn't worth much.  Punches by Marvy, faux brad by Candi, patterned paper by Lawn Fawn "Dahne's Closet" and stamps possibly by Fiskars (I dunno, it is a clear set that lost the bag or topper it came with).
Posted by Princess Judy Palmer at 8:10 PM 2 comments:

It's time again for the latest A Muse Studio Challenge and this time I get to be the hostess.  In honor of the ice breaking on the Santa Cruz River* this weekend, I thought this latest challenge should be all about summer!  I apologize in advance if you are still shoveling snow.  Try to think ahead to warmer times.... I promise they are coming! 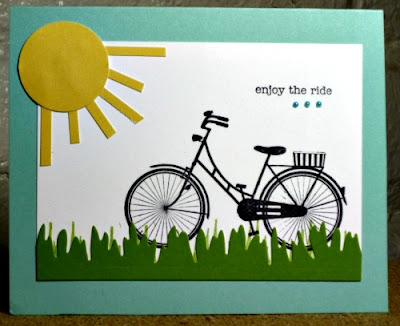 Summer is a time to carefree and have fun! What do you do in the summer?  Summer is all about vacations, food, great times, and outdoor activities.  I work at a school so I still associate summer as a time with no school, even though my school has summer classes.  Summer students tend to be serious folk who know what they want so they don't need us around to hold their hands, so summer is a much more laid back time. 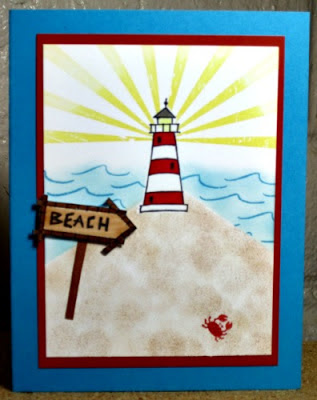 What does summer mean to you?  Summer here is about extreme heat and sunshine, wearing gloves to drive your car, and looking for the cool shady areas to while away the hours.  Tucson empties out in the summer as the university students and winter visitors all head home and many permanent residents leave for vacations in cooler locations.

So, for this challenge think of what summer means to you and make a card representing that.  You don't have to use A Muse Studio stamps but you get bonus points if you do.  Swing on by our Challenge Blog and link up your summery card today!

The Fine Print: *Having the "ice break on the Santa Cruz" means we hit 100 degrees for the first time that year.  All card products by A Muse Studio.  Bike Card: stamps used-Enjoy the Ride and Friends Fur-Ever (for the stamped grass that mostly got covered up); cardstock used-Bermuda, grass and papaya; Other supplies-Bermuda tiny pearls. Beach card: stamps used Grunged Sunrays and Life's a Breeze; cardstock used-ocean blue, cherry red ad sugar white; other info-sand is cocoa ink sponged on with a dauber.

Posted by Princess Judy Palmer at 12:01 AM 3 comments:

What I Love About My Husband

Me: I am going to eat the left over fajitas.

Him: You can have whatever you want. 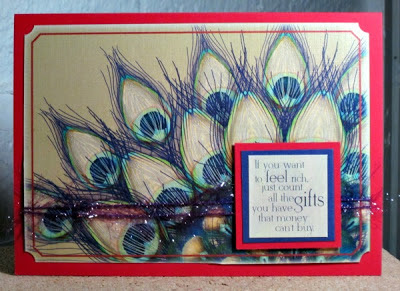 I love a man who knows what's what!

The Fine Print: All the card stuffs by Club Scrap "Peacock" kit.  I hope you like peacocks because I made over a dozen cards with this kit this weekend.  I mean,sure maybe you came to my blog looking for ideas using the latest Spotlight A Muse Studio sets, but sorry, all you get are peacocks.  A whole flock of them coming up!  Oh.  Okay, maybe a small taste of A Muse tomorrow but that's my limit. 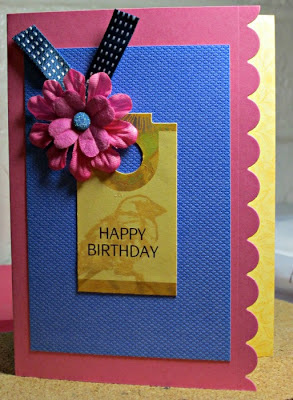 One time I went to dinner with various parts of my family and family friends.  My nephew and his friend were young 20-somethings and spent a better part of the evening discussing the cars they were working on.  We heard tales of shiny hubcaps, throaty mufflers, gleaming chrome, and various wing dings under the hood that would increase horsepower.  My little brother and his friend just kept smiling and nodding at each other, since they knew those were big concerns at that age because those were their concerns 20-odd years ago.

At some point in the evening my mother inquired why all this was important.  The answer, of course, was to impress chicks.  That really got my brother and his friend grinning.

Paul, the friend, leaned forward and asked the pair if they knew what kind of car chicks dug the most?  They made some guesses about high end sports cars that no one not a rock star or someone having a midlife crisis really drives.  "No, what chicks really dig are cars that run!"

All the real adults at the table burst out laughing.  The two kids, not so much.  They failed to see the humor in it, especially since neither of their cars actually ran.  And to boot, even if their cars did run neither of them held valid driver's licenses since they both lost them to youthful shenanigans.  They didn't have steady income to actually do all this mythical work on their cars or to do that other thing that chicks dig: go out on dates. 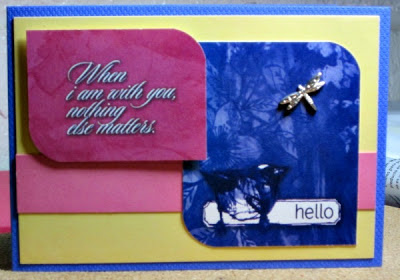 So there you have it.  What chicks really dig is cars that run.I know it gets this chick hot.  I'm fond of dudes who do housework too.

The Fine Print: That was when I knew my little brother had finally grown up and realized that reliable cars were more important than shiny gizmos and thumping stereos.  It is many, many years later and I still don't think my nephew has figured it out yet.Cards and part from Club Scrap "Birds of a Feather" kit.  Other pieces are Stampin Up ribbon, A Muse scallop border die, Prima Flowers and a Recollections brad.