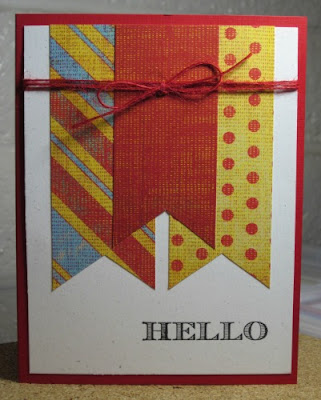 If you read my post last week about my stamp club's birthday party then you'll know what these cards are all about.  They were an easy project that could be duplicated for 50 people and as a bonus showed folks a way to use up scraps.

As much work as it is I love doing make and takes for people.  For one thing I know how much I love to do them so I like to give that to people.  Plus so many of my fellow crafters are collectors only who rarely ever make anything.   This gives them the chance to actually create and maybe they'll go home and start using some of those supplies they are hoarding. 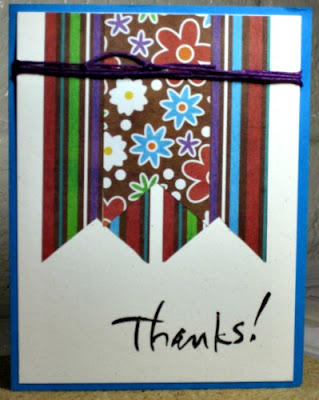 One of the other things I like about make and takes is seeing what people end up making.  This one was especially fun because there was such a wide variety of paper strips to chose from as well as an array of greetings.  Every single card made had its own unique flavor to it.

Most of the ladies did the exact same design as I did and that's fine.  There were a few rebels who struck out on their own, mostly by adding more strips of paper.  Others changed how the bottom of each strip was cut.  Instead of an inverted V, they did an angle or a point.  There were other ladies who wanted to follow my sample cards to the letter.  They looked for the exact same strips of paper I used (and they were there to be had).  Some wanted to know the exact measurement each strip of paper hung down and where the exact placement of the greeting should be.  Others yet wanted to know how many times around I wrapped the twine. That is what is so fun about crafting.  We each have our own approach to projects.

The Fine Print: Greeting stamp by A Muse Studio, paper strips from Basic Grey, and twine from May Arts.

What?! Crafters hoard supplies?! I have no idea what on earth you could possibly be talking about...lol :) No idea's at all. Have you been to your new Hobby Lobby yet? Paper is on sale this week! I only got a *few* new pads. :) They're half off, how could I not? lol Take care dear!

I think the banners look awesome!