The other day Carol made this cool double fold gate card that she copied from Wendy who learned it from Dawn's tutorial or you can see a static version on Dawn's blog. Of course I had to jump in and check out all those links and the tutorial and make my own. 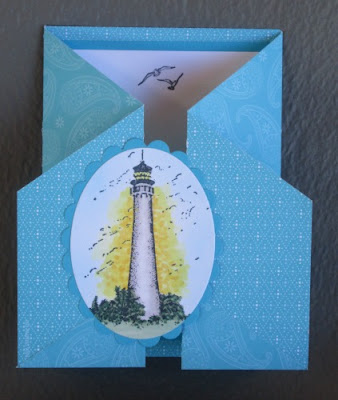 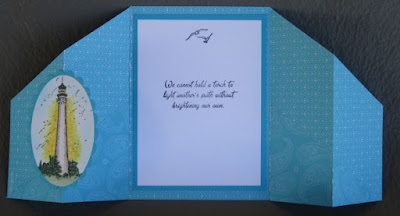 This is an easy card to make so check out Carol's, Wendy's and Dawn's cards and try one yourself!

* In my defense, not that I really have one or need one, this stamp set was housed in a CD case and for the longest time those weren't in my craft room or by any of the crafting stuff (it was with the CDs).

The Fine Print: Stamps by The Angel Company, designer paper by Stampin' Up, and the technique, well now you know all about that!
Posted by Princess Judy Palmer at 9:40 AM

What a cool shaped card.

The paper is subtle, but it's gorgeous. Love that color. Nice stamp, too, and an interesting technique that even I might be able to handle.
(I was sure this was going to be another image from your Club Stamp kit.)

Beautiful card. I love the light around the lighthouse. So cool!

Another of your wonderful fancy fold cards! Love that lighthouse!

I saw ​your card linked at the ​NBUS​ challenge and just had to come see it in more detail. Awesome card! I am now your newest follower and would be honored if you visited my blog and became a follower too. http://karenskreativekards.blogspot.com/

What a pretty lighthouse on a beautiful blue cardbase i love the dsp you chose for this because it's peaceful and serene. Love those gulls flying inside too! Thanks for the shout-out too..........these folded cards really are fun to make aren't they!

I'm so impressed you checked out how to make this card, Judy--it's wonderful!

Great card Princess J - and I do love the NBUS stamp and how you have used it.
Blessings
Maxine

That is such a fab fold :-) Love, love, love nautical cards and this lighthouse is perfect. Love the splash of yellow and the beautiful cool blues. Makes me want to head for the beach :-) Jayne x

You pack the most fun in a couple of sentence, PJ! You have just written the first episode of Stamping By Lamplight (dramatic music) where Susan learns from Lisa that Marleen told her that Donna ... love it!! And I love your lighthouse card in the pretty duel blue paper! It looks not that easy to me, but I trust you. And your defense stands. You may be seated. No one will convict you under the circumferance!! Hugs, Darnell

Oh I love this card. Going to check out the links. Thanks for sharing Judy. Barbxx