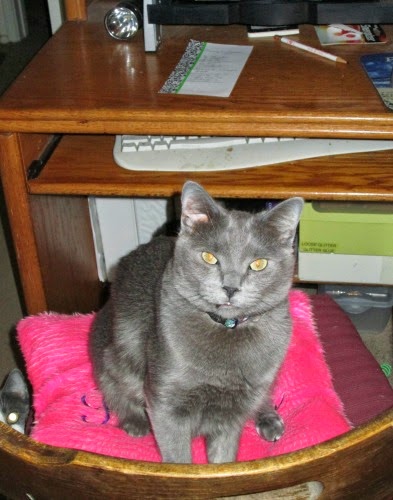 Hello, My name is Dio and I'm going be your Guest Columnist today because my mom is in a funk. I fink that means she smells funky.  So I had lots of frets this morning.  See mom and dad's cooking machine doesn't work any more. It doesn't make hots.  The landlords are going to bring us a new cooking machine.

Mom tooked the drawer out of the old cooking machine and fished all the mousies out from under it.  She said she didn't want the landlords to see them.  Then she picked up all the mousies from all over the house and hid them!  Does that mean the landlords won't let us have mousies??!  Do we have contraband mousies? I so worried they will see my mousies and take them away.  I'm gonna growl at them when they come with the new cooking machine. Just you see.  That way they know don't mess with my mousies!

My mom says I should talks about budderflies not mousies.  See she made this card for Misses A's budderfly challenge where you had to stitch things up. Well, not really.  She started it but she didn't finish it. I don't know why.  Probably she was scrooing around that's why. She certainly wasn't petting me! 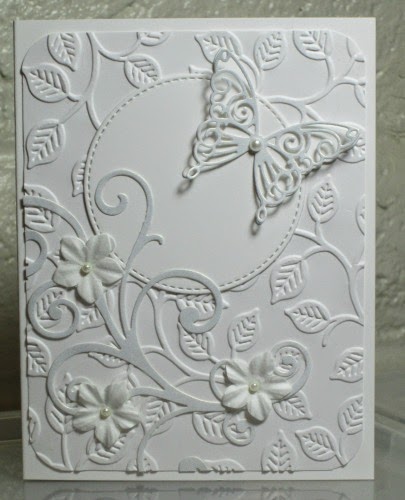 She did finished it now though because it was a dual purpose card for sumpin' else besides a budderfly challenge.  It's got some shimmers on it but you can't really tells too much here. 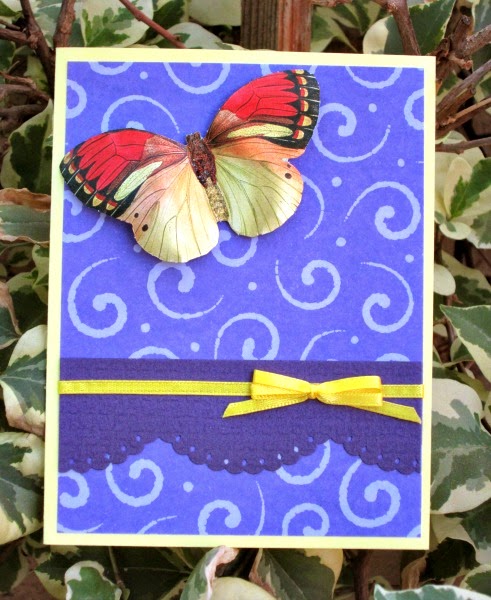 So my Mom made anofver budderfly card because I guess she likes budderflies or maybe Misses A said she should make one with yellows in it this time.  The budderfly is like metallic shimmers and that is why it had to go outside to get its pickture taken. I'm not allowed outside. 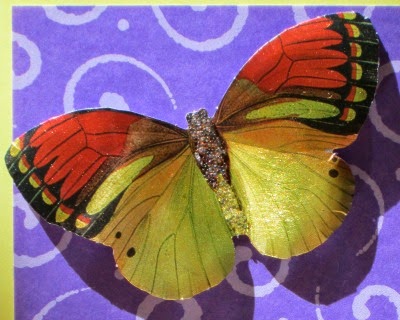 I'm supposed to say that because this card is rather plain Mom put little clear microbeads on the budderflies body to jazz it up, but really its cuz she scratched some of the color off of it, but I'm not allowed to tell that.  I'm not allowed to tell the bad wordz Mom said trying to tie that double bow either.  Anyway, that's the budderflies and I'm Dio.   Until next time....

PEE ESS... Mom says both these cards had snippers in them so they can go merry go 'round on the playground with Di and you all will know what dat means.

My name is Cindy said...

Hi there Dio, I think you did very well as a guest columnist and I hope mummy is not in a funk anymore and the landlord has been with the new cooking thing. I am a little concerned about all those mousies - are they presents for mummy or did you put them under the cooker to keep them safe?

IMO budderflies are much nicer than mousies but then I am not a cat. Please tell your mummy that the white card is very, very pretty. And that there is apparently a way to tie tiny yellow bows using a fork but I have never tried it. And also say thank you for visiting me today when she had so many mousies to deal with. It is much appreciated. See you soon! Cindyxx

Dio, you're one very cool cat and a wonderful subbie blogger for mommy! She made 2 mighty purty butterfly cards, and I hope your mousies are all put into a safe place until the new cooking machine comes. ME-OWWWW Ciao

Dio, you did a wonderful job of subbing for mama while she was in a funk! I know she'll let you do this again too cause you're so good at it!
Sorry out the mousies - but am sure they'll be more lurking around somewhere.
You mom did a great job on those butterfly cards - they're both just beautiful. Be sure and tell her so!
Lynn

Hi Dio...hope your mousies are safe and back in their regular places.

Did the cooking machine thingy arrive yet! Then you can get some hots again!

Your mum makes pretty cards but you are a smart guy and I bet you know that already!
The white on white one is so very elegant and the yellow one is spot on for this weeks challenge.

Had to say Judy did chuckle my way through this and Mrs A will be thrilled with your guest columnist as well as Miss - yep both are "wuvvly" cards!!

..and yess keep those mousies safe now, Shaz in Oz.x

Morning Dio . . .I understand that your Mom got sick, so I hope she's feeling betters now!?

She's very clever making these 2 gorgeous cards - please tell her they are both STUNNERS.

Your mum is really clever ain't she Dio - making gorgeous cards with budderflies on 'em - and from snippets tooooo! Very very beautiful Dio.

By the way Blossom says you are a very handsome puss and she likes your eyes! Purrfect.

Hi Dio,
Can I be your typing buddie cos I do so miss not having 'The Wimps' around to talk to any more. Hope you managed to find hiddie holes for the moussies to live and the new hot fooder thingy has been installed so you caqn have your porridge for breakies again. What no porridge?!! You need to get your Mom trained betters. 'The Wimps' always went to workies/sleepies on a plateful of porridge!!
Anyways I digress. Your moms budderflies are bootiful especially the multi coloured one wid the mistake covered up on it. Whose to know. My lips are sealed. Thank you for coming by and playing wid my budderflies . you are welcome any time. hugs Mrs A. (Butterfly challenge).

Ah, Dio - your lovely post did make you smile! So good of you to take over doing the blogging stuff, hope to see you posting again sooooon.

I adore both cards your Mum made - especially the white on white one!

(What, I'm typing a comment to a puddy tat?)

Don't you think the cards are pretty, Dio? Even if she couldn't pet you while she made them. Maybe she'll buy you a new mousie to make you feel better.

Dio did a great job posting for you! I totally adore your all white card--one of my all-time favs!

Can I borrow Dio to write my posts? And 2 gorgeous butterfly cards! Hope you got your cooker replaced and Dio has all the mousies back!

Hi Dio,
tell your mum that her budderfly cards are very beautiful.
Love the all white one.
Good luck on harassing the landlords when they arrive.
Lots of crafty love. Jenny L.

Hi Dio pleased to meet you!
You seem to have such a 'wicked' sense of humor. good job you can drink your milk cold what with the cooking thingy breaking down don't they realize you keep them mousies there for a reason?? A cat's got to have some place for their stash.. Butterflies aren't half as much fun especially if they fly off..
Tell your Mom I Love her cards...GORgeous White on White..
and BEautiful colours on the Butterfly one.
Chrissyxx

Ahhh, Dio, so nice to meet you! Storm says hi! Tell mom her all white card is beautiful and I am so glad to hear that I am not the only one that takes FOREVER to tie a double bow! OH MY, I feel like I have all thumbs! I love the shimmer and micro bead butterfly! BeaUtiful! Hope mom is out of her funk now!

Hey Dio - hope your mom has her hots back by now... sandwiches are no way to live. You wouldn't like it round our way - we used peppermint oil to scare away all the mousies... they vanished like magic!

Can you tell her please that I love her budderfly cards - especially that white one - wow!
Alison x

Now this is a guest columnist ;) What is it with kitties & hiding their good stuff under the stove anyway? There & the fridge. Harumph!
Gorgeous cards, btw, and don't worry, Dio - bad words are part of the creative process. Trust me.

Your Mom sure is lucky that you help her with her blog posts! Please tell her that both of her cards are fabulous! I hope that she is in better spirits and that she has a working cooking machine again!

What a fun post! Fabulous cards, the white one is so tactile, very elegant and the yellow one is striking. Cathy x

Hope your Mum is in a better mood now, Dio! Tell her from me that her cards are so beautiful! I thought you had caught her a real butterfly to stick on the second one - great effect! Send her a big purr from me, and try and find a good hiding place where your mousies stay put!

Oh Dio, what a clever kitty you are! Can you teach my Cassie & Charlie how to write a blog??

Nice to meet you Dio - it's clear you are one clever cat, especially as you clearly appreciate mousies :) Love both cards Mom made, especially the all white one, it's stunning. Hope by now you have a super-dooper new cooking machine which makes hots. Hugs, Elizabeth, and The Boss, who is in awe of your writing purr-ess! xx