Happy Super Bowl Sunday for those of you who are football fans (that's 'not soccer' for you Brits) and may your team win! 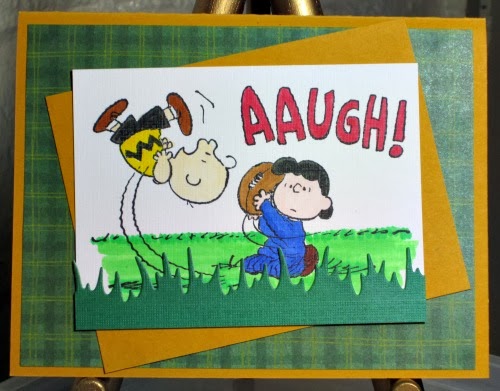 Not having much interest in football I leave it up to hubby which team we'll be rooting for.  He says we are rooting for Really Bad Weather this year.  I had no idea they were playing and I'm not sure their team colors so we'll just have to make due with the ones I've chosen above.

I'm going to go out on a limb this time and enter this card into two challenges.  I used to think that was being naughty but now I realize it is just reality.  There are so many challenges I would love to join that either I double up or I quit my job and if I do that I won't be able to afford myself.

This card has many snippets on it--the linen textured white piece (used to be my go-to white until I realized just how annoying the texture it so stamp and write on), the ochre colored underneath and the green the grass was die cut out of.  The card base, while not a snippet, was in my "use me up soon please" pile (because I have about a dozen of them).  So off to Pixie's Playground this card goes!

Also I will enter this card into CraftyHazelNut's Patterned Paper February Challenge because I covered the back of the card in patterned paper.  Now I realize that almost every card I make is covered in patterned paper because that's my thing but I wanted to play in this challenge to maybe get some new paper ideas from my fellow participants.  Could be fun, eh?!

The Fine Print: Peanuts stamp by Stampabilities, colored in Copics, grass die by A Muse Studio.  Feel free to swing by the house for some wings, chicken strips, and flavored chips that fight back (meaning HOT).
Posted by Princess Judy Palmer at 11:20 AM

Love it! Very cool card. I am not a sports fan but have watched three rugby matches in the Six Nations Championships this weekend as am staying with my daughter and son-in-law for a few days and they love it! I got right into it! xx

Great card, fab image and layout.
OTT means over the top.
Thanks for your visit, have a good week.

HA! looooooove peanuts, what a great use of that image. i doubt we'll be seeing such conduct at the super bowl... actually... if there was any chance i *MIGHT* just watch, lol! think i'll stick with the "puppy bowl" on animal planet!!! :)

Great card - just right for the Super Bowl - I won't be watching - no interest in that stuff - much rather make a card or two....

What a fabulous fun card - I love it!
xx

Your cute card pretty much sums up the Superbowl this year! The Broncos were playing something, but I still haven't figured out exactly what that was - it definitely wasn't football! LOL The Seahawks outplayed them so bad it was extreme humiliation! Even the commercials were pretty bad this year too - but the half-time show was worth watching with Bruno Mars :)

Great card for a football day!

Super dupery card. Don't do sport of any kind much to much like hard work. Is someone planning on a breakout then? When are we going over the top? Iv'e got me pliers handy for snipping the Wire! hugs Mrs a.

Great card PJ, and Peanuts was always a huge favourite of mine. Super (bowl) use of snippets too!

Oh, oh, oh... major Peanuts fan - and Lucy's never-ending duplicity with the football is one of my chief joys! Thank you for this... and I hope you enjoyed the Super Bowl - whoever ended up winning!
Alison xx

Thank you so much for joining my Craftyhazelnut's Patterned Paper Challenge for February with your super cute card - hope to see you again soon. x