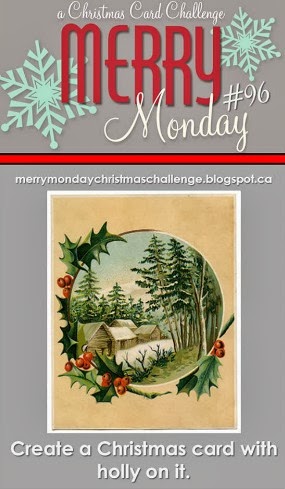 Yes this means it is time for our Very Merry Monday Challenge, which is to use holly on your card. I wasn't entirely sure that I had any stamps of holly except for some very small sprigs, but I knew I had some dies.  Then I remembered I had the mother of all dies--an entire background of holly--and I just knew I had to use that.

The card seemed boring and dull until I broke out with my Ruby Red liquid pearls and that changed things around right quick. I am so pleased with how this card turned out I probably will make a couple more of them. 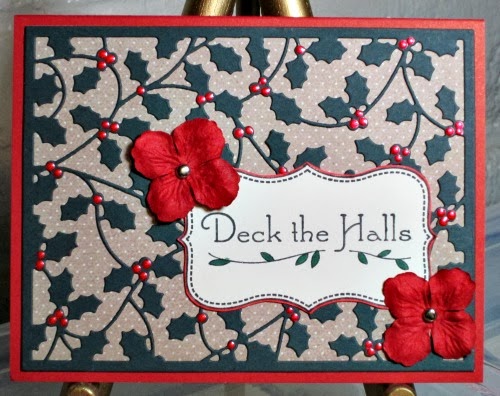 The Fine Print: Deck the Halls stamp by A Muse Artstamps, holly background die by Taylored Expressions, flowers by Prima, brads by unknown (not those horrible from before), Ruby Red liquid pearls by Ranger.
Posted by Princess Judy Palmer at 7:11 AM

Very elegant and beautiful, and the card is gorgeous too! ;)

Very pretty card, I love the liquid pearls with the background die. Thank you for joining us for Merry Monday.

That background die is awesome! Love the liquid pearls. Thank you for joining us at Merry Monday!

Wow, the holly background die looks amazing and the addition of the Liquid Pearls is perfect! x

oooo--ahhh Just like fourth of July. I love the red pearl pen. You're right the perfect accent and wowsa's a whole entire bg ground cut out, i think that was a great purchase. :)

Wowsers! I have this die, but NBUS as yet! Thanks for the idea to jazz up with the berries. It did make it sparkle so well. Love your sentiment label with that pretty pen stitching and your bright red flowers. Like this a WHOLE lot! Loved your song too. Yep, cats don't care. Dogs go hide. Ask how I know this! Hugs & TFS

That holly background looks amazing with the red "pearls!" The red flowers are the perfect accent! Well done, now continue on with your fa-la-lahing :)

This is a fabulous card, I love your holly die and the liquid pearl berries are perfect.
Pauline
x

What a fabulous die! I agree the red dots really dress this card up and make the holly leaves pop!

This is an amazing die, Judy! And those little red berries are delightful! Now I'm singing Deck the Halls! I'm so glad you shared this at Merry Monday!

What a perfect die for this challenge! The red liquid pearls really do make the whole thing pop.

A) I am glaring at you with narrowed eyes right now about the earworm. GAH. Better words, though, fer sure

B) omg, that's fabulous! The LP totally rocks, and I love the simple font for the sentiment!

C) I'm done glaring now. In case you were worried.

How pretty, Judy!! I love that background die and how you've added the liquid pearls! Terrific sentiment to finish this off! Thanks for playing along with us this week over at Merry Mondays! :)

VERY pretty!! Love those Liquid Pearls in the red too. I'm already singing!!! Have a fa-la-la-la-la-day too!
Lynn

Indeed this is brilliant! I do love those Liquid Pearls and you did a wonderful job with yours, PJ! My card last night? I finished all, say, 18 drops and then, yup, the last one burped out a tumor drop. Argh. I mean you couldn't do that if you tried and, yet, it happens!! Loved your new rendition of Deck the Halls, BTW!! Hugs, Darnell

Love your card and that die is fantastic...may have to check that out!! :0) (like I need more, but you know what I mean, right?!!!!) Love your song rendition too...I have 2 dogs that like to share in the celebrations (mostly Daisy who likes to eat the ornaments...she's part goat and part Springer Spaniel).

Oh the background die is fabulous (now I have to get it!) and the special treatment for the berries looks wonderful! Thanks so much for playing with us at Merry Monday!

Love this!! That background die is awesome and I love how you perked it up with the red berries! Thanks for singing the diddy at the beginning too - awesome! Thanks for joining us at Merry Monday this week xoxoxo