My big stamp club does a mystery item challenge every month.  You agree to make a card using an item that you don't know what it is until you get it.  You aren't obligated to use it once you have it (meaning no one sends dogs and big tough men named Guido after you if you chose not to join in) but it is more fun if you do.

This time around we were given old fashioned black photo corners to work with. Everyone got at least two, if not four. Over 40 packets of them were handed out but only 15 hardy souls brought back a finished card.  Who would have thought that black photo corners were so challenging? 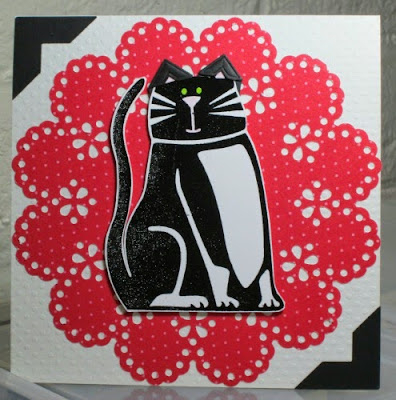 I think what happened is that people didn't just want to use them on the corners of their focal image so then they didn't join when they couldn't think of anything else to do with them.  I would have done that if an inspired idea hadn't come to me.

Can you see what I did with my black photo corners in the above card?  I'll give you a hint, I'm not talking about the big black chevrons in the two opposite corners.

The Fine Print: Look ma! Heat embossed! Cat image by unknown (self mounted stamp given to me as a gift), doily made with the Martha Stewart circle punch thingy, and chevron punch by EK Success. A rare 6x6 card by me!
Posted by Princess Judy Palmer at 7:36 PM

Oh my goodness! You're an absolute genius, Judy! Enjoy the holiday weekend!

p.s. I'm glad you gave us the hint, because I'm not sure I'd have spotted them otherwise!

Brilliant card-had to look again to see where the other two photo corners went!!! The cat look great now.

Thanks for the hint, because I DID think it was the corners. :)

You are too clever for words.

I love this! Great use of the photo corners! Actually I noticed the ears first before the corners because I had to admire the kitty! Lovey card and I love this colour combo!

Oh you're too sharp! Fab!

Why, yes, yes I can see that puss ears can be made from photo corners and that, my darling, is something I did not know before. And they are quite stylish, too. Mayhaps I won't purge my three packages of 150 each after all ... Hugs, Darnell

What a sweetie this is ...Brilliant design and pretty colours too.
Perhaps these people that didn't take part?? might have used them to stick photo's in the family album?
Chrissyxx