Return of the Rabbit

For some reason that title sounds all ominous to me, like some spooky dread music should be playing, but none of that nonsense here. I just meant I used the same stamp I used over the weekend to make another card.  Just like over the weekend, I was poking around in the paper box and found paper that would go perfect with this image.  This stamp is turning out to be a whole lotta fun. 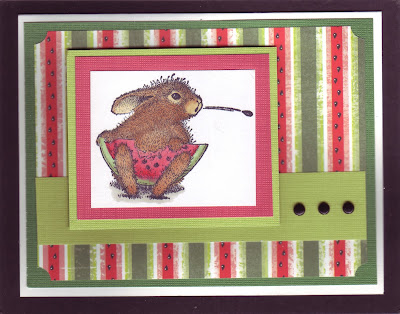 Although making this card wasn't that fun. I was having one of those "all thumbs and all dumbs" moments where I couldn't get anything to go right.  You know the old adage, measure twice, cut wrong anyway.

The Fine Print: Useless fact of the day-did you know Night of the Lepus was filmed in Tucson and that my little brother and I saw it when we were much too young to be watching something like that. Another useless fact-there was this drill/pump machine being used in the neighborhood that sounded exactly like the suspense music in the movie that would scare the tar out of us and send us running towards the house in a dead panic. It's a wonder we survived childhood.  Anyway... stamp by Stampabilities, awesome watermelon paper by unknown.
Posted by Princess Judy Palmer at 2:44 PM

Just PERFECT Judy! How cool to have the paper to match such a spiffing image!

Love that image - were you thinking of the Wallace and Grommit film - Return of the Were Rabbit? Or have I made that up. Missed you on WOYWW today so thought I'd pop in.
Take care - Hugs, Neet

You did NOT just happen to find this perfect paper just when you needed it, did you? If you did then you just met Serendipity Doo!

Well i just went straight to monday's post..oh Princess, you and I work the same way..except the nail varnish thing. i use diamond glaze...but it has to be really really important for me to allow drying time! As for the work desk....hmm, im liking it, specially the lovely card ideas....no, really..I shall credit when I lift!!