It is time for another A Muse Studio Challenge!  Actually, it is past time as there was a new one last Monday, but hey, better late than never.  Consider this a mid-challenge wake up call.

As some of y'all know, there are things that are retiring from the current A Muse catalog so that a new one can come out March 1.  I am sad to see these things go as I am rather partial to things.  The challenge this time around is to use some of the things from the retiring list. 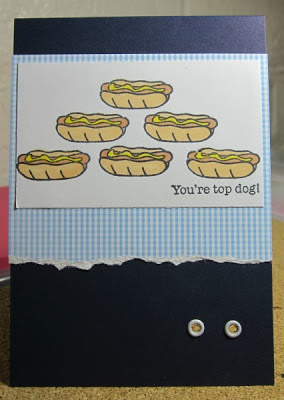 I decided to use the Hey Man set to make a couple of quick and easy manly note cards.  Hey Man is one of those sets that make you think of classic A Muse from the wood mounted days.  It has some great masculine themed stamps and I'll be sad to see this set go. 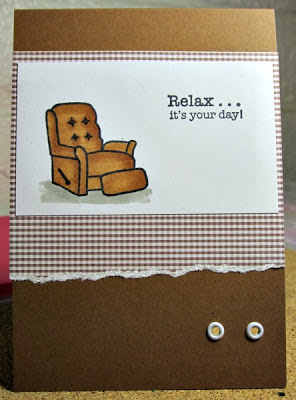 Not only did I use a retiring stamp set, but I used a retiring paper.  That's right, folks, if you didn't already know it you should sit down before reading the next sentence.  A Muse is retiring the gingham paper!

I know!  I know!  It is completely tragic! They will be doing something called pinstripe instead.  Hmmm.... Curious.

Anyway!  If you have some retiring A Muse products we would love to see you play along with the latest challenge.  You can check it out here.

The Fine Print:  Retiring A Muse products only available until sold out or February 28 (want something? get it now) .  Stamp set used Hey Man, cardstocks used navy, cocoa, berry gingham, French roast gingham, and white eyelet.  Everything by A Muse (who even sells Copic markers used to color these image).
Posted by Princess Judy Palmer at 7:55 PM

both these are fabulous - really cool mens cards xx