I was such a dedicated follower of Merry Monday at the beginning of the year and then I slacked off. I kept track of all the challenges I missed with the idea that I would catch up on them over the summer when they took a break, but I didn't.  Then they came back from break and I still couldn't kick myself hard enough to get motivated. 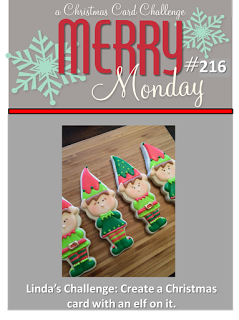 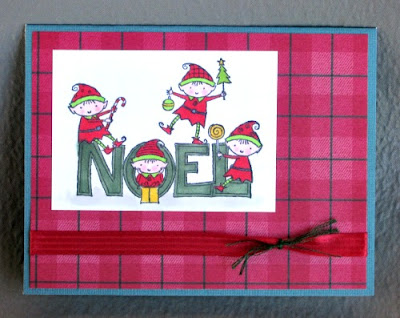 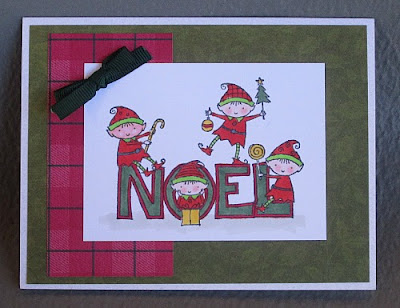 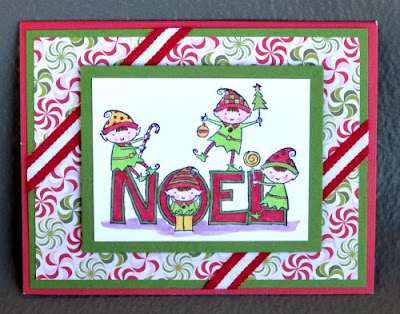 And then I went crazy and made three cards from that set. While making them I was thinking about how I hate writing stuff on the inside of Christmas cards but it seems wrong to just sign them (but other people don't have this problem and they didn't even make their cards). That got me thinking about jazzing up the insides so I wouldn't feel so guilty about just signing them. 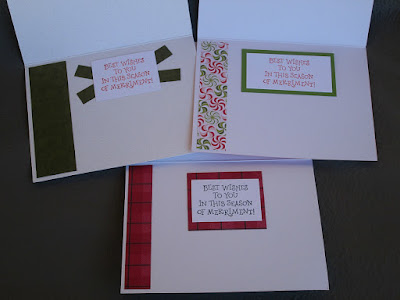 The Fine Print: I know it sounds weird to get motivated by something you don't have but I knew I had a gnome and a "gnome for the holidays" stamp and hoped it would be close enough that the Merry Monday ladies wouldn't throw rotten tomatoes or fruitcake at me. Merry Elves by Stamping Up.
Posted by Princess Judy Palmer at 3:00 AM

Email ThisBlogThis!Share to TwitterShare to FacebookShare to Pinterest
Labels: Challenge, Christmas, Stampin Up

Well . . . I hope the Merry Monday's gals DO throw fruitcake at ya . . . . cuz I'm having a helluva time getting those reinker drops out of my hair! So ner! LOL!

Very fun festive cards with your little elves. Well done on going crazy and making 3 of 'em AND jazzing up the insides to save your guilt on just signing your name!

It's a cute image. Glad you found it again and got some use out of it. I especially like the one with the candy background.

Well, Judy, all three are fabulous...what a cute cute stamp...love those three little elves! And great job with the insides! I'm with you, I feel I need to write a little note in each (or a story! *wink) and others just sign their name, I am so disappointed they didn't make it just a little more personal!! Thank you for finding that stamp and for joining us at Merry Monday!...I will look for you in the future!

Such cute elves, and a jazzy inside is a really good way to fill up the space when you've no time to do more than sign the cards!
Alison x

A funny and beautiful card in one,normal these are not my Colors but this one is very nice

Darling little quartet of elves and you colored them beautifully on all three cards! Way to step it up and get back into the Merry Monday groove!!

Now this is one cute collection of cards! I adore those elves and how well you colored them all! I really like those papers too - especially the one with all the mint candies!

Super elves and I love how the different paper gives them very different looks! So glad you shared them with us at Merry Monday!

Oh Princess J how you do make me smile - from nothing to three cards in one sitting. That is one fun stamp you used - love the insides too!
Blessings
Maxine

What a lovely card, just perfect, thanks for sharing!!!!!

Love these cards PJ! Such a cute image too. I don't have a single elf here, and being a pixie am sure that may count as discrimination.

Those elves are too cute for the holiday. They look a little mischievous too!

Loving all 3 of your jolly elf cards and so glad you got inspired to play along with MM again! Love how you did the insides of your cards too...and I like to write something personal inside my cards too...that's what makes them special!! Thanks so much for sharing with us at Merry Monday Judy!! :0)

What a neat and cute stamp set. I love your cards.

super cute! Made me smile!

what delightful looking cards...sure they will bring a smile to whoever receives one.

Wow!! Those are some super awesome cards!!! Thanks so much for playing along with Merry Monday.