Once More with Gusto

It turns out that ten quick cards were not enough (see yesterday's post if that confuses you) so another ten came into being using the same formula. I'm sure they all look rather familiar to you as you recognize the pattern I used from yesterday. 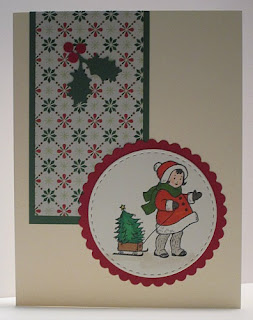 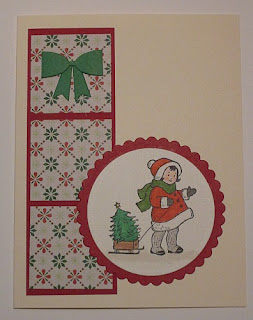 Yesterday I stamped, colored and cut out each snowman one card at a time. I varied up the blues a little depending on if I were pairing him with a light or dark blue. To make my quick cards even quicker this time I stamped and colored all the girls first using the same color palette for all. 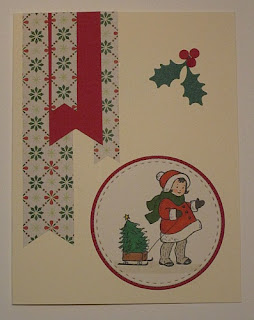 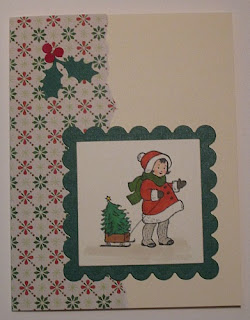 I did cut them out one card at a time as I decided if they needed an circle or square. Back when I first learned One Sheet Wonders die cuts weren't a thing, so pretty much everything was square unless you were proficient with a Coluzzle (and I wasn't). 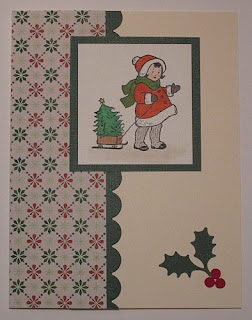 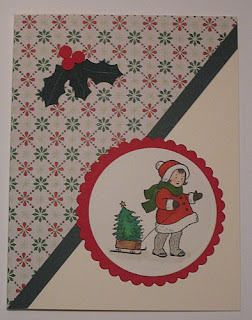 I couldn't decide what embellishment to use so I fluctuated between two different holly punches I own. I punched out little circles for the berries because I wanted them to be flat, but I think these cards would be cool with bling for berries. 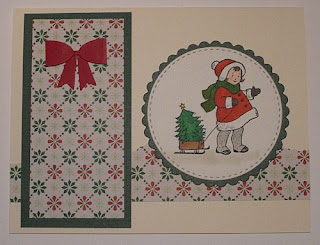 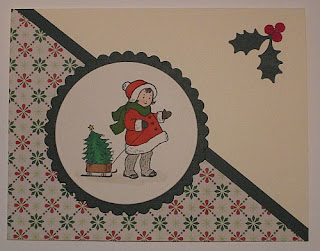 I really wanted to put bows with this cute little girl, but again I was going for flat. Then I remembered this small bow die cut I had and used that. That broke my rule of stick to what you know because I'd never used that die cut before. I folded it flat for these cards but it made so you can have rounded bows on it which makes it a bit fiddly to put together. The secret is text weight paper, not cardstock and use a bone folder to gently curve the paper. 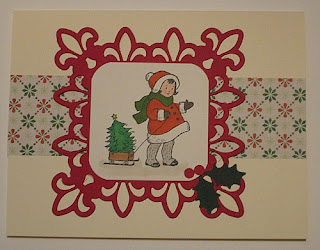 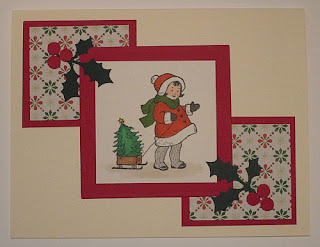 For One Sheet Wonders I like to stick to neutral card bases. Yesterday's were white and today's are cream. The scraps of paper I used to stamp the girls on was cream as well, although it was a lighter shade then the cards (just using the scraps I had handy). I know they look white in the photos but they aren't.  So that's that.

The Fine Print: Stamp by Stampin' Up "Greeting Card Kids," die cut pieces by Spellbinders except for the stitched circles and medium scalloped border by A Muse Studio, holly punches by Marvy (two leaf) and Martha Stewart (3 leaf), hollies on card 6 a die cut by A Muse Studio, and tiny bow die by The Stamp Doctor.

Posted by Princess Judy Palmer at 4:00 AM

Email ThisBlogThis!Share to TwitterShare to FacebookShare to Pinterest
Labels: Christmas, Stampin Up

There is just no stopping you! You are on a Christmas roll (or should that be Yule log?). Fab work.xxx

You have been busy, lovely traditional colours on this collection.
Pauline
x

I have Hammy and I see you have Gusto! And what a fine job you and Gusto did preparing this second part of your 20-card series using a master board, or as you call it, a one-sheet wonder. I am impressed, amazed, and in love with all of your super and superb flat Ccs, PJ!! You have hidden talents as a designer that you don't let us see. (Oh, well, doy, that's why they're hidden!) Now take twenty days off to rest!! (And you should win the Snippets Prize of the Year just for these two posts, if there is such a thing!) Hugs, Darnell

Well, when it worked so well the first time, why not do it again! This image is darling and the paper choice is perfect!

You are the queen of mass production I swear! This latest set of OSW cards is great because you paired the perfect papers and colors with that whimsical little image! I still have my coluzzle, can you believe it? LOL

Look at you! You're on fire, Judy! These are awesome too! These OSW cards are a great way to get a lot of cards made and yet they all look amazing! Well done!

These are wonderful, too--great template!

Hi Judy, cool collection of cards... love the multiples great ideas!! BTW you know the origami I shared last week well I met the lady today, at a restaurant, Chinese, great tucker, showed her my blog post on her work and she wanted a copy of the link sent to her phone. 😊 Small world eh, it was my sister who spied her origami pen holder and one thing led to another cos I'd sent her my blog post.
Thanks for sharing,
Shaz in Oz.x

No need to apologize for repeating yourself, this really shows what a great idea you had. I especially like the holly accents.

I love this little gal and her red coat! Pretty papers to go with her! I can't decide which layout I like best. They're all fantastic! Aren't dies wonderful?

these turned out great. the image speaks so much and you chose the perfect paper to go with her. i love your little ivy leaves.

Oh Princess J I love these - you really are on a roll.
Blessings
Maxine

love the look of that sweet vintage image and the way you have used it in so many different ways....TFS
hugs,
K