I had great visions this weekend of finishing off all sorts of challenge cards that I've started and not completed. I also had great visions of sitting on my behind. Guess which one won out?! I wasn't a complete lazy bum though and did make three birthday cards (and apparently only photographed two of them). 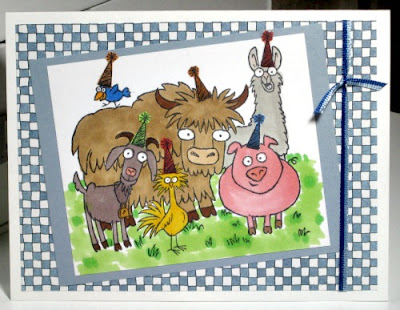 I made this fun card for my country farm girl friend who is having a birthday somewhere in the vicinity of Valentine's Day. I never remember if hers is the day before or the day after.  And no, that doesn't make me a lousy friend; I have no clue when my brothers' have birthdays either. I just know the general timeframe (mid-20's of August and November). 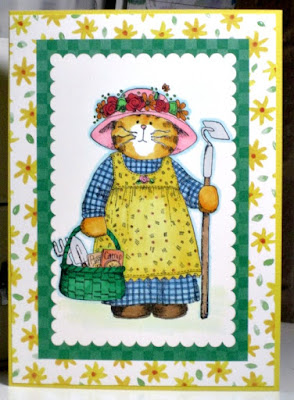 This brightly colored garden kitty card is for my kitty loving friend. I know this card doesn't look very birthday-ish but it has birthday greetings on the inside and that makes it a birthday card. 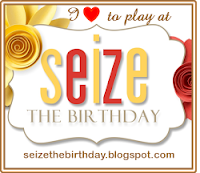 After faithfully joining the Merry Monday Christmas challenge every week I commented to a friend that I need to find a birthday challenge to join in on a regular basis to stay on top of birthday cards. She pointed me in the direction of Seize the Birthday.  They do an anything goes feature or you can follow their suggested topping if you'd like more guidance.  My two cards fall under the anything goes theme.

The Fine Print: Top card stamps by Stampin' Up, bottom card stamp by Peddler's Pack. Is it just me or does that top bunch look like a rough crowd?

Posted by Princess Judy Palmer at 9:53 AM

Love the coloring, especially on the kitty one. I agree, any card becomes a birthday card with the right sentiment.
I never knew there were birthday challenges but why not, it's a great idea.

Oh they're such sweet card. I love the dear little animals in the first card but the gardening kitten is adorable. Barbxx

the animal one looks like a lot of work. but coloring is always fun work. your kitty with the checked back ground is sweet. i have a gardening friend that i sned cards like this to for her b-day. thanks for the link.

I think a kick in the seat of the pants to make more birthday cards is on the agenda here too.
(today is one of my Marine Mom Friends day and I knew it was in the beginning of Feb but, holy how how did it get to be the 8th already?!) (so, guess what I am making today lol) anyways I think the kitty is very sweet and I am starting to lean towards the putting the sentiments on the insides so that way you can just have a stack of finished ( no sentiments on the outside ) cards to just grab one and make it work ( for all those procrastination times) kwim? :)

So "visions," huh, PJ? That's a good word. I call it napping, but I think I'm going to steal your word and starting calling it visions. I think your two (and even the unknown third) birthday cards are super fine! You know there is another fun challenge all over town called something like "30 Days of Coloring" ... you can color a bunch or 5 minutes ... so you should check it out, too. I'll see if I can find it. Here it is: http://www.thedailymarker.com/

Oh it's a wonderful thing that your visions & MY visions are separated by a great distance. My visions frequently run along the same lines as you mentioned, so I doubt we'd get much done! However, you have got 2 really adorable & cute cards. Love the Barnyard group, and I'm certain it's gonna bring a big smile. Also loved Gardening Kitty, and the image doesn't really need the sentiment on the front. Many times I think it's much nicer to have the 'sweet stuff' on the inside (well, that's my excuse when I can't think of a place to stick on a sentiment anyway...and I'm gonna stick with that excuse!). Kidding aside, it looks perfect, as is. Love the cheery colors too. TFS & have a great week.

Two fun birthday cards, PJ! As long as it's close to the day, who cares?

It's just you JP, that top card doesn't look like a rough crowd - they just look like they were celebrating all night with Peyton Manning! LOL I love what you did with that fun stamp and the gardening kitty is adorable too! Fun birthday cards!

Your cards are both such fun! Those farm animals always crack me up! I love the design with the checkered background and the tilted layer!
Sweet birthday card! It's a kitty, purrfect for a birthday card! Thanks so much for sharing the birthday link. I really, really need to get myself together as far as birthday cards go!

That SU animal stamp is just so funny. Love the card you've made with it.

Hmm... I think somebody may have laced the birthday cake with some illegal substances - those farm animals have clearly got the stares! And hey, listen - if your family and friends are getting a handmade card, they'd be churls to complain about the day it arrives.
Alison xx

Eek, these are so cute! Look at all of those animals! But I really love the farm-girl kitty! So adorable! Your colouring looks amazing!

I know your friends will love these, Judy! So fun to see a Peddler's Pack image! I haven't used any of mine for awhile & I really need to get back to their store which isn't all that far from me!

I to have great visions of making lots of cards PJ. Time sometimes is not on my side lol...LOve this gang of party goers Great colours and so much fun..
Your little kitty is cute too..That little hat full of flowers is so pretty...Looks birthday card material to me!
Chrissyxx